This month I, along with 14 other Unitarian congregants, visited Hamilton Ontario’s Baba Budha Ji Gursikh Temple. I had no idea I was about to have my entire mindset changed. No, I’m not converting to Sikhism, I’m still a Buddhist/Unitarian. I am however a more “enlightened” Buddhist. Enlightened from the experience of a wholesome spiritual practice we all could learn from and model; the practice of Langar.

During our visit to the Gurdwara the practice of Langar was explained as “Seva” or Service. Many Sikh communities around the world offer this “Langar Seva” as a support to the needy.

After we removed our shoes, covered our heads (kerchiefs are provided) we were invited into a large noisy community dining hall. There were a few tables and chairs reserved for those who could not easily sit on the floor. Almost everyone was seated on the floor in family groups eating from metal divided trays.

We were offered a hot vegetarian Punjabi buffet with volunteers coaxing us to serve ourselves. There were “afters” of sweets, tea and coffee. Later while touring the giant prayer hall we were offered a bit of ceremonial sweet pudding called karah prasad.

Over the next few days my curiosity led me online to find out what other “Langar” practices are alive in our wider community.

I came across this Globe and Mail article from March 2017 about a Meal on Wheels initiative developing in the GTA.

Excerpt from Langar on Wheels rolls out to Punjabi community

Renu Sodhi can remember very clearly the day she came back from surgery at the hospital. She and her husband Harinder were sitting on the sofa of their Brampton home – both hungry, exhausted and craving some home-cooked Punjabi food.

Mrs. Sodhi suggested they get Indian groceries delivered. “And we got the food, but who was going to make [it] I was so tired after my operation and [Harinder]can’t stand for very long because of his leg problems,” she said.

The elderly couple would have signed up for the local Meals on Wheels program, but the idea of eating shepherd’s pie or beef stew makes their stomachs squirm. They would rather have their fill of roti with some sabzi (vegetables) and dal(lentils).

It’s a complaint that Nirpal Bhangoo, a caseworker with the Punjabi Community Health Services, often hears when she makes her rounds visiting seniors at their homes.

“Many of my clients would prefer eating South Asian food because it’s been a part of their diet their whole lives,” Ms. Bhangoo said. “You can’t really expect them to change at that their age.”

The Greater Toronto Area’s South Asian immigrant population has grown by about 50 per cent between 2000 and 2006. That’s why PCHS is trying to drum up support for Langar on Wheels, a South Asian variation of the Meals on Wheels program, which would likely bring food from the langar, the Punjabi word for the communal kitchen in a Sikh house of worship, to the homes of Brampton, Mississauga and Malton seniors. The organizers say Langar on Wheels will be the first of its kind in the GTA and possibly even Canada.

The concept of a seniors’ food program is perhaps odd for South Asians given the norm of seva, or care for elderly parents in South Asian culture. But the Sodhis say values inevitably change in Canada. “In India, children selflessly serve their parents. When they are old, they take care of them,” Mrs. Sodhi said. “But here, who has the time? All the kids are so busy with their work. It’s just different. I feel so guilty asking them for help when I know they don’t have time.”

The practice of Langar predates Sihkism and apparently began with the Mystical sect of Islam known as Sufism sometime in the 12th century. 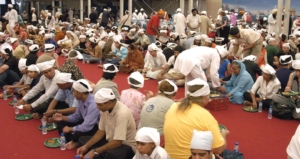 Langar is the term used in Sikhism for the community kitchen in a Gurdwara where a free meal is served to all the visitors, without distinction of religion, caste, gender, economic status or ethnicity. The free meal is always vegetarian. People sit on the floor, eat together, and the kitchen is maintained and serviced by Sikh community volunteers, never paid staff.

A community meal in progress at a Sikh langar

Wherever Sikhs are, they have established their Langars. In their prayers, the Sikhs seek from the Almighty the favour:

“May the iron pots of Langar be ever warm (in service).”