My mother was 47 years old when a stroke caused by a brain aneurysm hit. Suddenly her short-term memory, sense of humour and the vision on her right side were gone.

Her mood swings were 24 hours, seven days a week. She, who had been an organized and educated breadwinner, was now dependent on a 12 year old daughter and husband, for almost everything.

It took almost 2 years for my mother to find herself, again. She did it with the support of friends and family who allowed her to try out her old skills with her new brain. My father insisted that she try. He began by bringing her to work with him, usually taking a cut in pay so he would be allowed to take breaks to care for her.

Her first job was to use her artist’s skills and draw what she saw around her husband’s workplace. He would set her up with her favourite materials drawing pad and ink pens. She had always drawn from life so it came back easily. 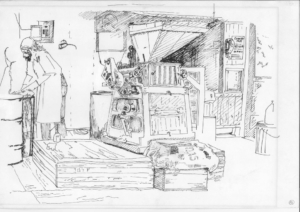 Then, one day when he was at a new job, he inquired if they needed someone in their typing pool. He was a smart man. He remembered how proficient she was at touch-typing and there was an opening for transcribing. No short-term memory or vision needed. She took to the job in a minute, making new friends and gaining respect.

She faced challenges with individuals not understanding her handicaps and had to explain how her memory and sight problems worked.

My father continued this co-employment strategy for the next 20 years. He wasn’t the kindest or gentlest caregiver but what he gave to her was priceless, the dignity of daily work in real workplaces, and her person-hood. 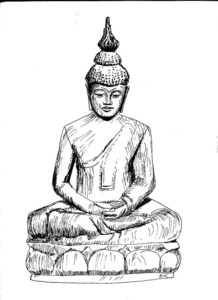