What LGBTQ Elders Need to Thrive

Previous Next
What LGBTQ Elders Need to Thrive

My Lesbian and Gay friends and relatives have experienced a lot of struggles over the decades: discrimination and bullying during most of their lives.

Accessing healthcare can be very stressful due to that same culture of discrimination.

When in hospital they often experience the small cuts to their dignity some people seem to feel entitled to dish out to them. Imagine the anxiety they face when considering long-term care.

Here are a couple of articles; the first is cautionary the second I found inspirational.

We’re going back into the closet’: LGBTQ seniors wary of being ‘out’ in long-term care facilities

LGBTQ seniors who were part of the long battle against discrimination and who’ve been “out” for years are now worried they’ll have to hide their sexual orientation as they face the need to move into long-term care facilities.

By 2024 almost a quarter of the population will be 65 years and older. There are no firm statistics or comprehensive studies, but anecdotally LGBTQ seniors say they have to make a hard choice at the end of their lives: Go “back into the closet” or accept inferior care and discrimination.

In the heart of Brooklyn, a community in great need is welcomed home

Of 145 total units, Ingersoll has 40 studio apartments meant for one person and 68 one-bedrooms for one to two people (say a tenant and spouse) — one of which must be 62 or older.

Much like the five SAGE Centers across New York City, the first floor of Ingersoll Senior Residences will be a SAGE Center, offering social activities and programs for those inside and outside of the community.

“It’s a community-based organization that provides lunch, services and a place for people to talk about benefits, questions and concerns,” says Millard-Bethea. “There will also be an on-site social worker, and community activities like groups and trips.” 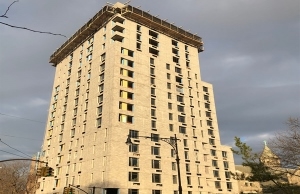