National Housing Day each year marks the anniversary of the declaration in 1998 by the Toronto Disaster Relief Committee that homelessness was a national disaster. First Toronto city council and then the Big City Mayor’s Caucus of the Federation of Canadian Municipalities passed a similar motion on November 22, 1998.

Homelessness is still a national disaster. The men, women and children without homes in our city face serious risks to health that shorten lives. Minus a home, they cannot build a life.

The city of Hamilton has a list of homeless people who are in contact with any service provider. A year ago, there were 1,100 names. Many more homeless people aren’t seen. And as fast as the city could find housing for some on the list, more were added.

Homelessness is just the tip of the iceberg of a crisis of affordable housing. For several decades, the cost of housing has risen faster than incomes, leaving tens of thousands of Hamilton households—and several million Canadian households—struggling to pay rent or the mortgage. They skimp on other costs to do so, often at the price of their health or other necessities. Many are just one financial crisis—a health setback, a surprise bill, a layoff—from losing their home.

For statistical purposes, housing costs are judged unaffordable if a household spends 30% or more of its pre-tax income on rent and utilities, or mortgage, taxes and utilities (and condo fees for condo owners).

And it is getting worse. As the chart below shows, average rent in Hamilton has risen by half over 10 years, almost three times faster than inflation. 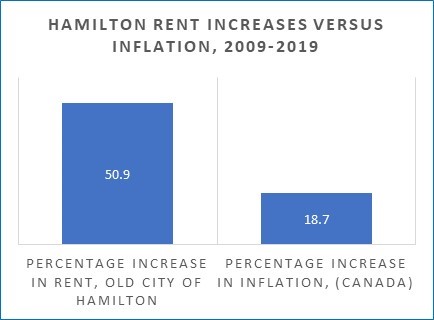 Housing costs are unaffordable for one in four Hamilton households—one in six homeowners, almost half (45.4 percent) of renters. Twenty percent of Hamilton renters spend half their income on rent and utilities—13,700 households. Some pay much more. But even paying half puts households at serious risk of falling behind and being evicted.

There are no simple, or inexpensive, answers. The National Housing Strategy, while a good start, aims to reduce something called “core housing need” by less than a third over a decade and would leave 2.8 million households still paying unaffordable housing costs. Just to end homelessness in a decade—housing those already homeless and preventing future homelessness—would require building 300,000 housing units, twice the National Housing Strategy construction target, according to consultant Steve Pomeroy. So we need a much larger commitment to building new non-market housing—community housing and co-operative housing—ideally in mixed-income buildings.

Among other needed measures, most of the 600,000-plus existing community housing units, built decades ago, need renewal. Plus we need to find ways to preserve the existing stock of affordable private-market rental units—we lost more than 320,000 units that rented for $750 or less between 2011 and 2016, during a period when only about 20,000 new units of affordable housing were built. And many hundreds of thousands of households with adequate but unaffordable housing need supplements to afford their rent. We need to find ways to curb speculators who trade in housing units as they do in stock or gold.

Safe, secure, affordable housing is the foundation for healthy, productive lives. Providing it needs to be a national, provincial and local priority.

Bill Johnston is co-chair of the Affordable Housing Team at the First Unitarian Church of Hamilton. The views expressed here are his own. Most statistics are based on the 2016 Census or Canada Mortgage and Housing Corporation data.

Steve Pomeroy, Recovery For All: Proposals to Strengthen the National Housing Strategy and End Homelessness: