On March 26th, during the Memoir Fest zoom event, I was honoured to announce the establishment of the Hamilton Aging in Community Award for Enhancing Resilient Aging which is inspired by and recognizes Mary Buzzell’s enormous contributions to supporting the resilient aging of older adults in our community.

Mary Buzzell is an individual who has influenced peoples’ lives locally, provincially, nationally and internationally. She is a teacher, a clinician, and an advocate whose life and work exemplify excellence, commitment and caring.

Mary Buzzell’s work in the area of caring for life and health, particularly older and vulnerable individuals, spans six decades and crosses many disciplines. She has worked tirelessly to develop and disseminate knowledge and skills related to enhancing the lives of vulnerable people. Mary Buzzell has promoted the concept of personhood and the importance of interdependence to support resilient aging in the community.

In 2001 Mary was awarded an Honorary Doctor of Laws degree from McMaster University. In 2012, Mary was recognized by the Canadian Gerontology Association and received the Queen’s Diamond Jubilee.

Intro to the recipient

Each year this award will be given to a member of the Hamilton community who reflects the spirit of Mary Buzzell and someone who has helped to foster resilience among older adults in our community. It is my pleasure to announce that this year’s recipient of the Award for Enhancing Resilient Aging is…

Stephanie’s academic abilities, her specific research interests, and her learning and volunteer experiences make her an excellent first recipient of this award.

Stephanie will be graduating in the fall from McMaster University in the honours program in Aging and Health.   Stephanie has demonstrated a very strong interest in developing community support to improve the aging experience, particularly by designing and facilitating arts-based activities with older adults including the Intergenerational Memoir Project. For two years she also led the Hamilton Aging in Community project for intergenerational cardmaking in which grandparents brought grandchildren to the library to make greeting cards together (see photo below). 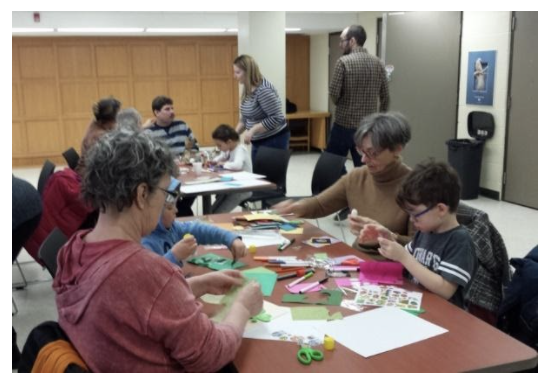 Stephanie has a genuine interest in focusing her graduate research on the efficacy of arts-based intergenerational communication and connections for building individual and community resilience.

Stephanie’s community contributions, artistic talents, academic achievements and her genuine passion for promoting resilience through innovation make her an ideal recipient of the Hamilton Aging in Community Award for Enhancing Resilient Aging.

About the Author: Jasminder Khehra