Like most seniors, I want to live out my life in my own home. That will require government action

Previous Next
Like most seniors, I want to live out my life in my own home. That will require government action

Like the vast majority of Hamilton seniors, I don’t live in a long-term care or retirement home.

And even before COVID-19, and the tragic deaths in those settings, most of us didn’t want to. We want to live out our lives in our own homes.

Whether we can will depend on both our own decisions but critically, on government policies and investments affecting five key areas.

Three-quarters of Hamilton seniors own their homes, and most have paid off their mortgages. But still, 14.5 per cent of senior home owners pay unaffordable housing costs—costs that are 30 per cent or more of pre-tax household income.

And while Hamilton rents rose by a third in the past five years, Old Age Security, Canada Pension Plan and the Guaranteed Income Supplement grew by only 8, 10 and 19 per cent.

A growing proportion of Canadian seniors retire with debts—43 per cent in 2019 versus 27 per cent in 1999. Only 37 per cent of paid workers have employer pension plans, a key to financial security for seniors. That’s down a bit since the 1990s and there’s been a big drop in defined benefit plans, the ideal.

After declining sharply from the 1970s to 1990s, the percentage of seniors in poverty is rising. One in eight Hamilton seniors lives in poverty. Recent increases to federal benefits for single, low-income seniors (mostly women) help, but a senior who never worked might have only $1,617.49 a month of federal and Ontario income support. For them, affordable rentals (under $485) are almost non-existent.

Accessibility and adaptability of our homes 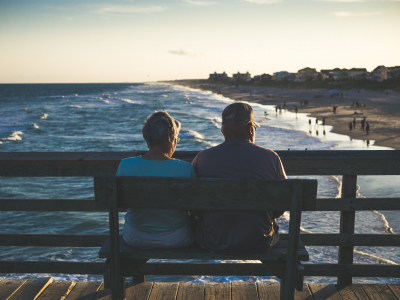 As we age, more of us with face various physical and mental disabilities. We will encounter barriers in most homes, like my front stairs, threshold and narrow front door. Accessible homes or apartments are rare. In 2017, just 63 of CityHousing Hamilton’s 7,000 units were accessible by any measure.

Current Ontario accessibility standards apply only to new construction or major renovations and only to multi-unit buildings. Even there, only 15 per cent of units must be accessible, mainly for barrier-free paths and doorways.

Houses and apartments can be adapted—and the Ontario Human Rights Code requires landlords to make changes to accommodate tenants with disabilities. It would be much cheaper to require “universal design” standards for all new housing rather than to adapt later.

Homecare, for health or for help with daily activities, is critical to aging in our homes. Yet a Statistics Canada study found that an estimated 430,000 seniors have unmet homecare needs.

There are things I can do to strengthen my connections with others, but community design also plays a big role in fostering or inhibiting, connections. Seniors who lose their license can be stranded in car-dependent communities, especially developments on the city fringe without transit. Well-designed, compact, mixed-use neighbourhoods, with housing near stores, services, transit, parks and recreation, foster interactions for people of all ages.

Shared housing, such as McMaster’s Symbiosis program and co-owned homes, can overcome isolation while housing costs are reduced through sharing. Secondary suites, which Hamilton is rightly encouraging, have similar benefits. Co-housing, which Cohousing Hamilton is planning to create, is designed to foster interaction. 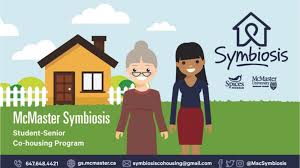 I’m fortunate. I’m healthy and well-housed. But that could change, suddenly, and force hurried decisions I might not choose. Planning ahead requires individual decisions but also advocacy for changes to public policies and spending priorities that are needed if seniors are to have the housing options that best meet their needs.

Learn more about what individuals and public policymakers can do. Watch the webinar, A Place to Thrive: Options and Possibilities for Seniors Housing that Hamilton Aging in Community and the First Unitarian Church of Hamilton presented and recorded on Thursday, March 25. 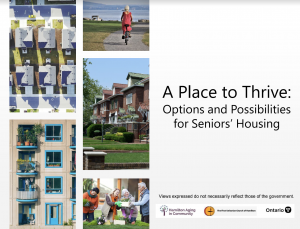